Alright, alright.. here is a travel related post – as mentioned in a previous post I had been to Vancouver, Portland and Seattle in November for a couple of weeks and absolutely loved it all! Portland had been on my radar for a while and when I started planning my trip there everyone I talked to said I MUST go to Voodoo Doughnuts.

And because I always do everything everyone tells me.. I went to Voodoo Doughnuts… 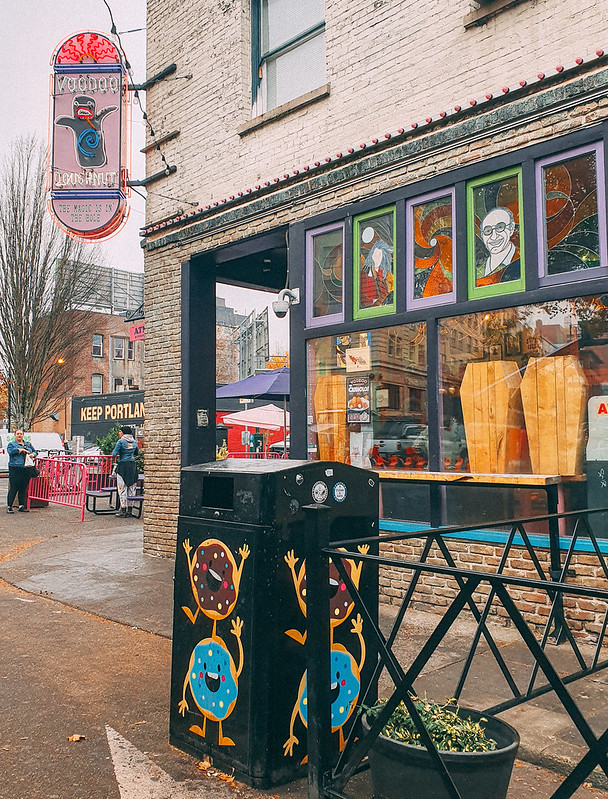 I had also been told to expect a line out the door no matter what time I visited. When I got there, around 11am, there was no line waiting outside and only a couple of people in front of me in the store – I don’t know if I picked the right time or the weather (quite cool & overcast, about 9 °C) or if I was just lucky. I think it was a combination of the latter two, to be honest. More people arrived after I did and the line did get longer but It wasn’t out the door at any stage. 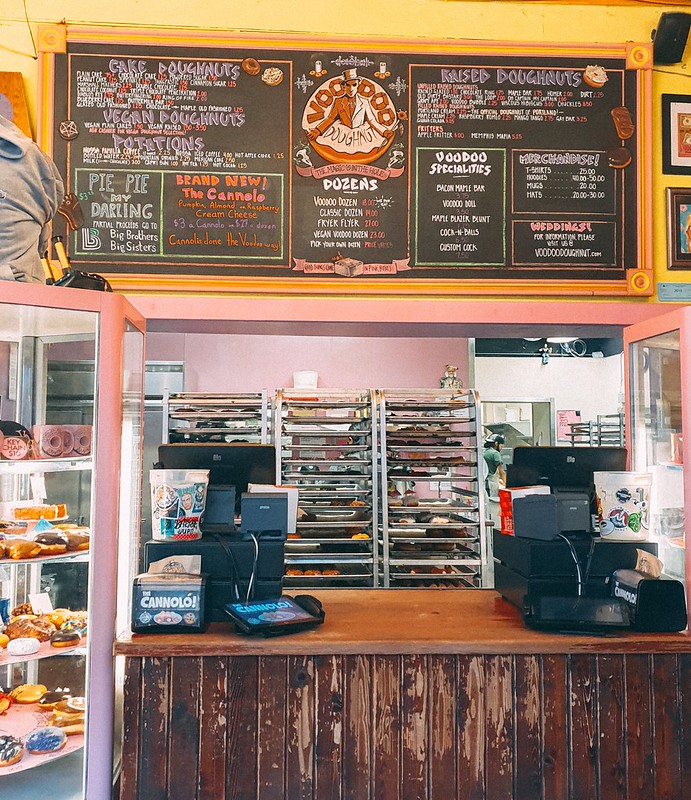 I think the reason there is usually a queue is because once you get to the front of the line, you then need to choose which doughnut(s) because of course you can’t choose from the posters – you have to actually wait and see the doughnuts in person before making the all important choice. Plus they don’t only sell doughnuts, but have a range of memorabilia you can also purchase. 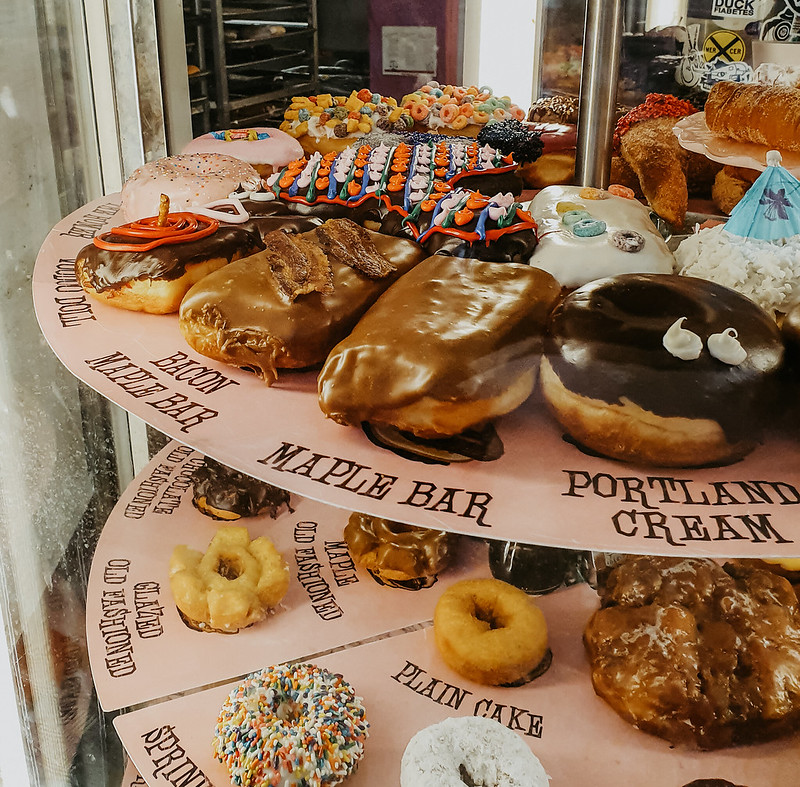 I actually had no real idea of what I wanted except that I had to get ‘The Loop’ because it featured on an episode of one of my favourite shows, Leverage, which was set in Portland at one point during its run. There is a scene where three of the characters are in a van & they have a box of Voodoo Doughnuts. One of the three (Parker) decides she has to have a bite out of each of the doughnuts to see which one she likes the best – one of them was ‘The Loop’. 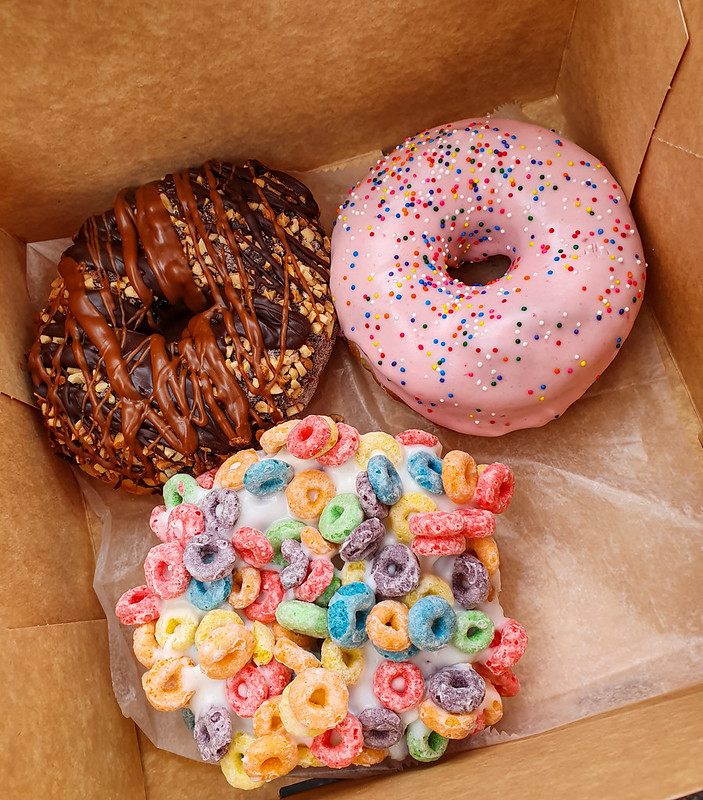 My other two choices (yes, three in total!) were ‘The Homer’ (“Raised ring dipped in strawberry flavored frosting and a smattering of round sprinkles”) and ‘Chuckles’ (“Raised yeast doughnut with chocolate frosting dipped in hot chocolate powder and topped with peanuts and caramel and chocolate drizzle”), which was this Snickers bar kind of one that the guy behind the counter recommended to me. I also got a very cool mug that I was going to give as a present but loved it so much, it is now my pen holder on my desk at home.

Where they worth the hype?

Well ‘The Homer’ was freaking delicious, I can tell you that. It was so fresh and soft, just thinking about it makes my mouth water. The other two were ok.. ‘Chuckles’ was actually a bit too sweet for me and ‘The Loop’, well I think it is one of those ones you have to eat super fresh – for me, it definitely looked better than it tasted. 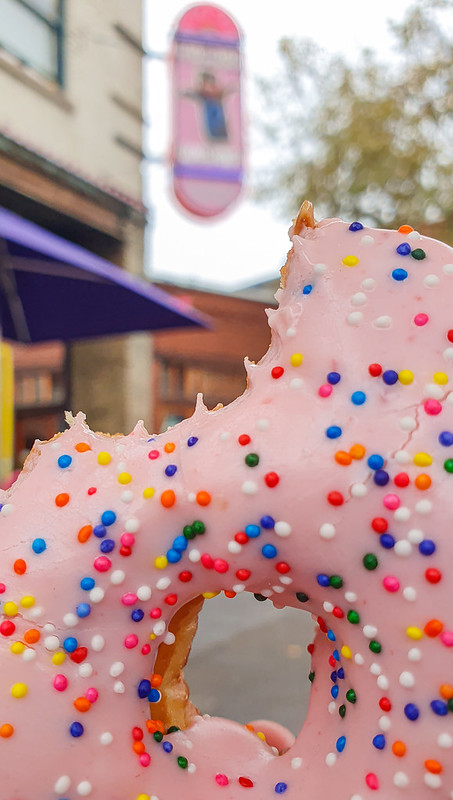 Rookie Mistake: because I went to Voodoo Doughnuts kind of at the start of my day, I then had to carry around the box until I got back to my hotel, so it was a bit awkward & cumbersome. It was a very cool box though 😂 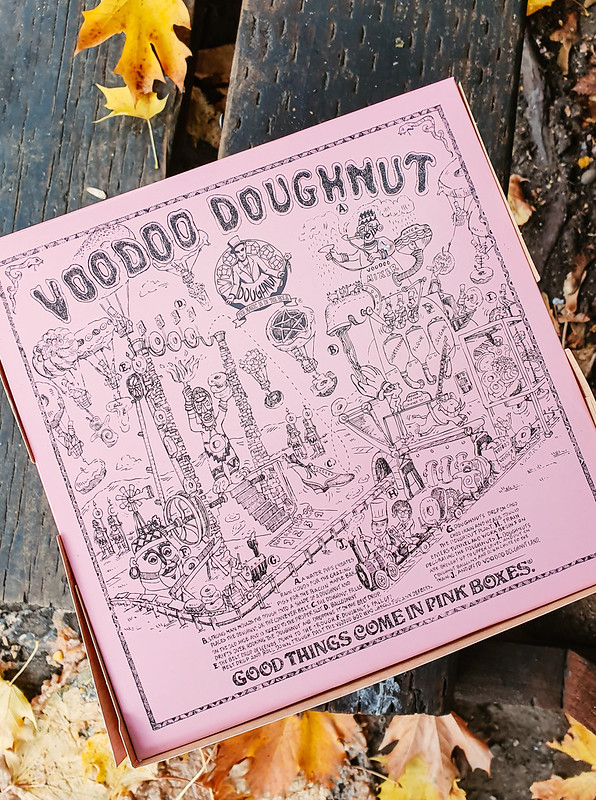 There are other doughnut places in Portland but Voodoo Doughnuts is probably the most famous. I didn’t try any of the other places so I can’t really say anything except that I really enjoyed my Voodoo Doughnut experience a lot.

I think the real testament whether a place is good is the “would you go back or recommend <insert place name here>?” and the answer is definitely yes on both counts. 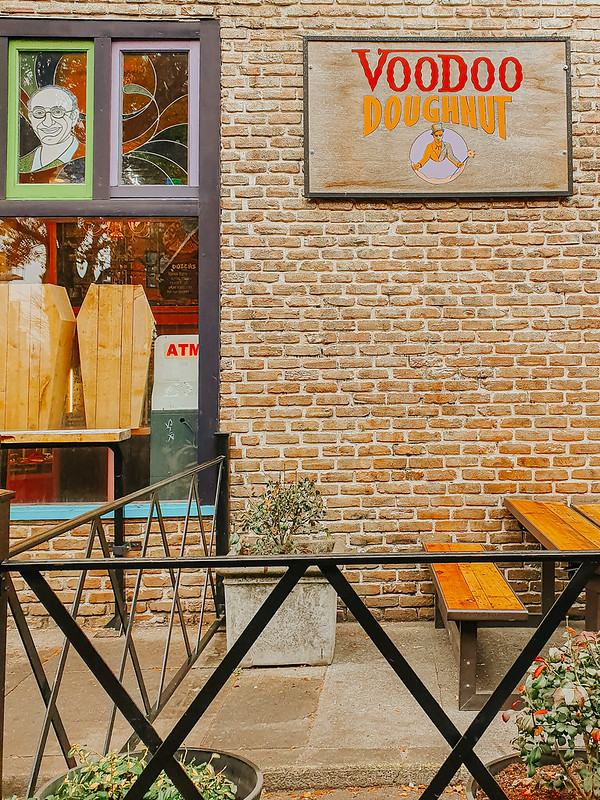