Sitting in my suburban flat in Brisbane at 7.30am on a Sunday morning waiting for my groceries to arrive seems like the perfect time to reflect on the year that was.

2016 has not been the best year on record. But I think it’s safe to say it hasn’t been the worst either.

For me personally, it hasn’t been a bad year as such just one of ‘meh’.. I probably brought it on myself by being all anti-travel – which of course I kind of regret now. But in saying that, I am a big believer that everything happens for a reason. You might not be able to see that reason straight away but it doesn’t mean it’s not there.

So this year I have found a room in a hotel for a very reasonable price and booked it. I’ve invited a couple of friends to come up for the fireworks display so I guess it’s save to say I am hosting a NYE Fireworks Party 🙂 I feel very grown up!

So if you’re a regular reader of my blog you will know I have travel plans to England in February – I mean it was an ongoing saga for a while, you can read about it here and here if you so desire.

Well I have finally decided on a plan that I am actually really happy with, so here it goes:

4 days in London – this will be the least amount of time I’ve spent in the city but I’m quite excited about it. I am staying right next to the London Eye; I am planning to add to my tattoo; I want to go to East London to check out some street art; and I really want to attend an Evensong service at St Paul’s Cathedral… among other things.

3 nights in the Cotswolds – after going to Castle Combe last year, I fell in love with this area and am really looking forward to exploring it more. Plus I am finally getting to Stratford-upon-Avon to visit Will 🙂

3 nights in the Peak District – ok I’m slightly excited about, mostly because of the place I am staying in. Wortley Hall, just outside of Sheffield – I mean how gorgeous is this place! I am also planning on visiting Lyme Park, made famous in the BBC Pride & Prejudice as Mr Darcy’s stately home, Pemberley. 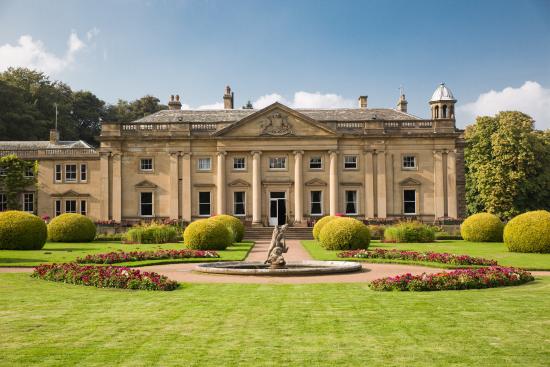 3 nights in the North Yorkshire Moors – Staying in another lovely place and exploring places like Whitby, Scarborough and Robin Hood Bay. But I think the thing I am most excited about was something that I happened to see on my Instagram feed one day. I was on the bus, on my way home from work and I audibly gasped when I saw the photo.

Now the whole reason I changed my travel plans to February was so I could go to a play. The play got sold out before I got tickets – which I might have been slightly upset about – but remember when I said that things happen for a reason way back at the start of this post? Well this was the reason. The North Yorkshire Railway just happens to be running in February only for the days that I am in the area! I mean if that isn’t Kismet I don’t know what is.

I love steam trains so I am really excited to be doing this short but exciting journey.

3 nights in York – This is something that I am ticking off my bucket list. I have wanted to go to York ever since I was a little kid. My dad use to bounce me on his knee as a child, singing “The Grand Old Duke of York”. When I found out that York was a real place, I just knew that one day I had to go visit the Grand Old Duke. What is even more poignant about this trip is that I will be in York on the 9th anniversary of my father passing away.

1 night in Manchester – I am flying out very early on a Saturday morning from Manchester so it made sense to get a room by the airport for the night. But I will be spending a bit of the day before in Manchester itself – already looking forward to going to the John Ryland Library

So February is a full on month but I am also planning a trip to Australia’s capital of Canberra in April/May for a long weekend, which I am really excited about. I’ve been waiting to go to Canberra for a long time and I’ve heard really good things about it – apart from all the politicians of course. I will be visiting the city during autumn too which means autumn foliage – something that Brisbane doesn’t get sadly.

Heading home for my mum’s birthday. I’ve decided that this will be a new tradition until she passes on – don’t worry, I’ve told her that.. she laughed 🙂 I use to go home for my dad’s birthday, although some cynical people think it might have been because it was right around rugby season but those people are wrong… very, very wrong – there just happened to be a game on whenever I went home for his birthday, complete coincidence!

I’m also excited that on the same trip I will be spending a few days in Wellington, New Zealand’s capital. I haven’t been to the city in around 18 or so years. I was meant to go for my birthday last year but it didn’t work out so I am making it happen this year.

After last weekends day trip to Toowoomba, I’ve decided that I want to explore a bit more of my own backyard so I’m planning on two weeks driving around with not much of a plan at all.. I want to go back to Toowoomba and drive down to Grafton in NSW for the Jacaranda Festival but that’s about it. Other than those two places I don’t really have a plan, which is very unusual for me and something that kind of scares me.

They say you should do one thing once a year that scares you.. so maybe that will be mine 😀

I would like to do a few other things next year but will see how they pan out. Anything has to be better than this year right?

Someday everything will make perfect sense.
So for now laugh at the confusion,
smile through the tears,
and keep reminding yourself that
everything happens for a reason.